PROJECT RAYGUN TO LAUNCH KICKSTARTER CAMPAIGN FOR COURT OF THE DEAD: MOURNERS CALL 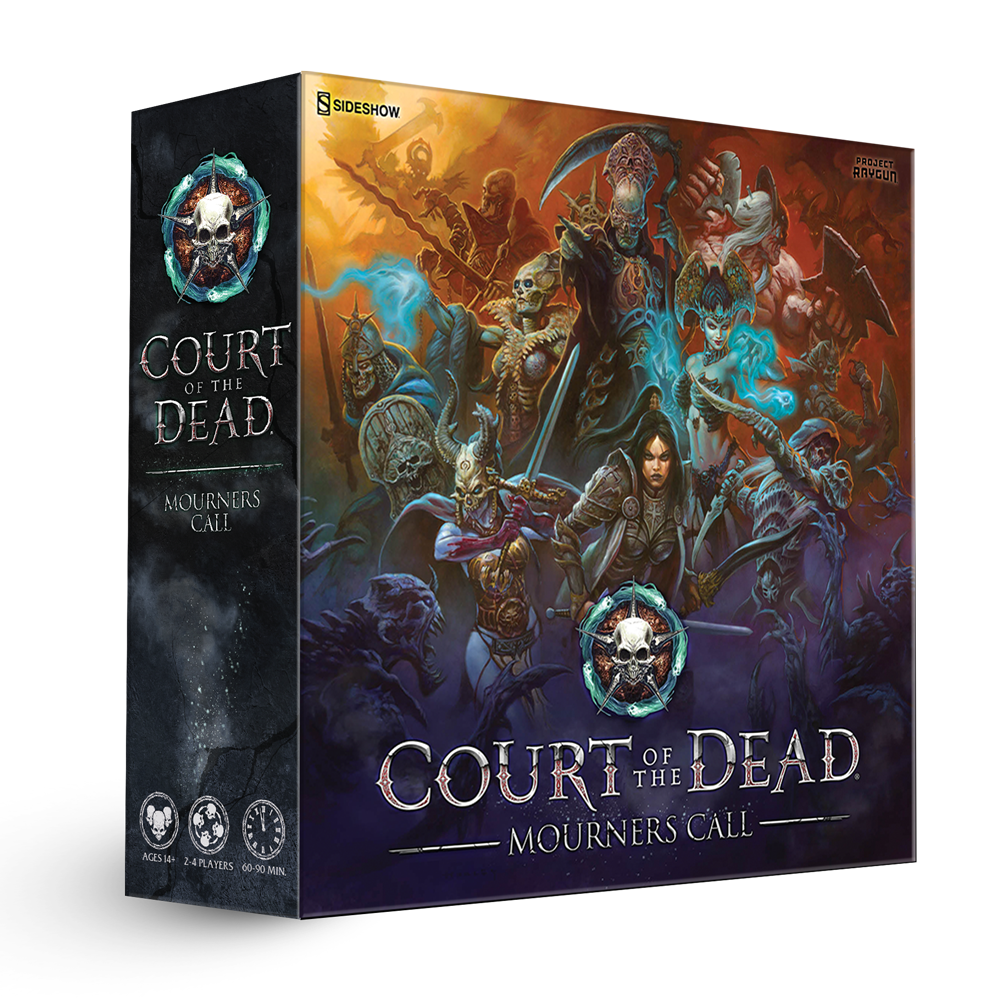 This highly anticipated campaign marks the latest collaborative effort between Project Raygun and Sideshow, which will lean into a booming segment of board game Kickstarter campaigns that saw more than $130 million in pledges last year. Managed by James Hudson of Druid City Games, the Kickstarter launch is slated to commence in late April and run through mid-May.

“Court of the Dead: Mourners Call is more than just a tabletop game; It’s an immersive in-world experience,” said Tom Gilliland, Sideshow Chief Creative Officer and creator of the Court of the Dead. “Through highly-detailed card art and ornate 3D miniatures, players will be transported to the macabre and magical Underworld. Players face grave circumstances: They must balance both cooperative and competitive objectives by working with the other players to appease the mortally bankrupt, oppressive celestial overlords in a way that achieves their own individual vision of a unified Underworld, ready to rise up in rebellion.

Stay up-to-date on Court of the Dead: Mourners Call news at www.MournersCall.com. A steady stream of exciting Kickstarter exclusives, deluxe milestone rewards, and special stretch goals will delight campaign supporters. For retailers, opportunities include purchasing the Kickstarter edition of the game in case packs at wholesale prices.

Media and retailers can learn more about what’s in the works by visiting USAopoly, Inc. and Project Raygun at GAMA in Reno, NV from March 13-15 at booth #106. For more information and details, visit ProjectRaygun.com. Visit Sideshow at Sideshow.com, and learn more about Court of the Dead at CourtoftheDead.com.

About Sideshow
In 1994, Sideshow embarked on a mission to connect fans with their favorite characters from the worlds of film, television, comic books and popular culture. Sideshow continues to further that legacy today as a specialty manufacturer of both licensed and proprietary collectible products. Sideshow is also an acclaimed conceptual art and design studio. Launched in 2013 at San Diego Comic-Con, the Court of the Dead is Sideshow’s debut original property. The Court of the Dead is a dark fantasy horror universe conceived by the studio’s Chief Creative Officer, Tom Gilliland. The Court collection features some of Sideshow’s most sought-after figures.

About Project Raygun
Fusing exceptional art and entertainment, Project Raygun is a revolutionary boutique board game, puzzle, and collectibles brand. The company’s launch of The Thing: Infection at Outpost 31 with Mondo Tees in 2017 provided an innovative tabletop gaming experience with cutting edge nostalgia, the finest pop art, and a contemporary retro style—all signature qualities of Project Raygun creations. Project Raygun products celebrate pop culture of past and present, while paying homage to the artists that bring them to life. Partnering with fellow pioneers in the creative and collectibles space, Project Raygun aims to deliver unparalleled experiences to their audience.

About USAopoly, Inc.
USAopoly Inc. is a leading developer and manufacturer of board games, collectibles and puzzles. We’ve been producing the world’s most beloved games “with a twist,” under license from Hasbro, since 1994. Our partners include marquee brands and licensors such as Disney, Nintendo, Warner Bros., Cartoon Network, HBO, FOX and CBS. With the 2009 release of Telestrations®, named the #1 Party Game by Board Game Geek, we launched our original game business. Our portfolio of original games is constantly growing and now includes the award-winning Telestrations® After Dark, Tapple®, Rollers®, Nefarious™ The Mad Scientist Game, and many more.
USAopoly is serious about fun and games! Our goal is to show our passion through each and every game we make. Our games are created to bring people together to share an emotional connection and make memorable, fun experiences for families, friends, game enthusiasts, fans, and collectors alike.